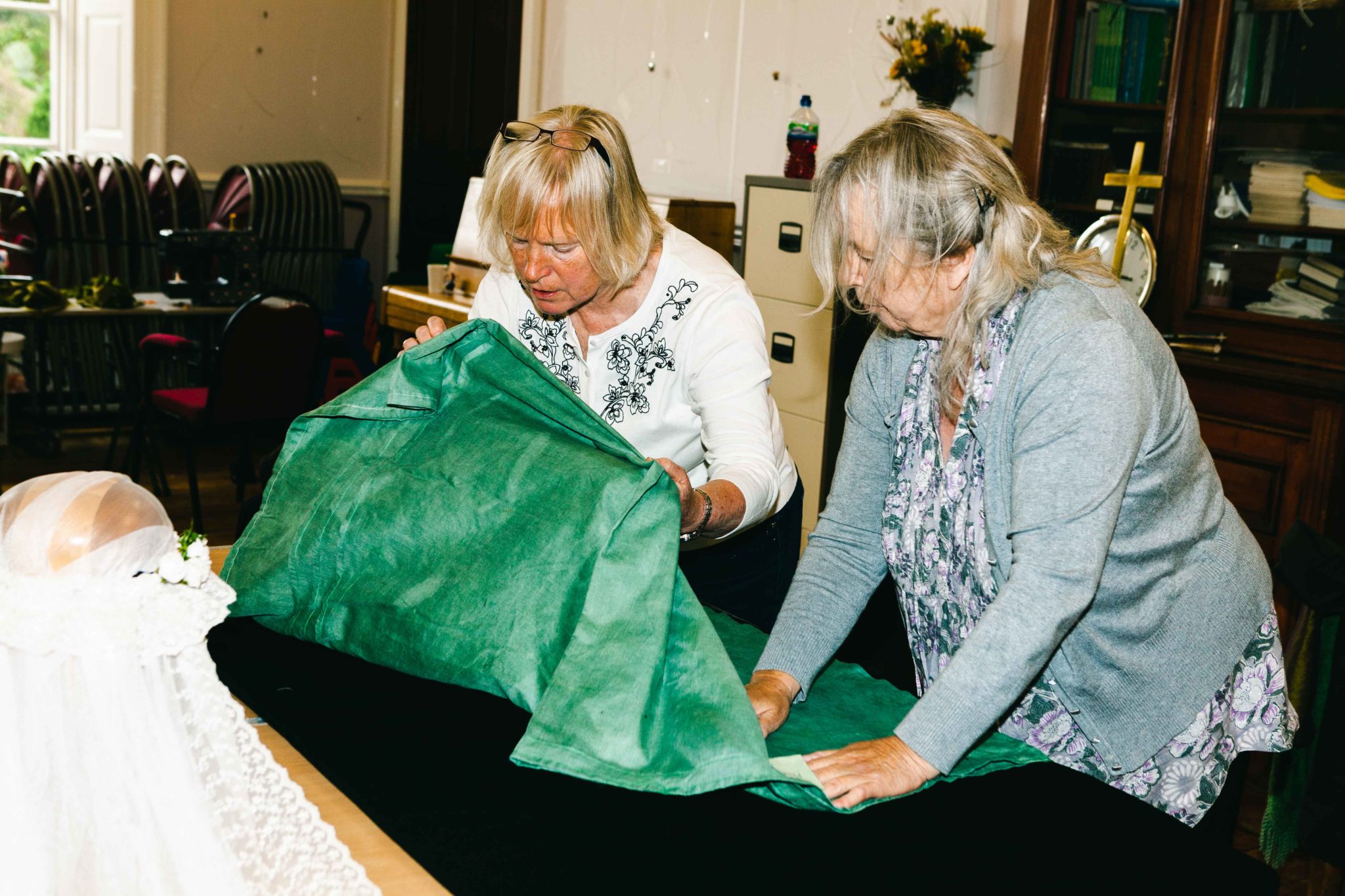 One of our amazing costume team wrote this inspirational piece about her experience…if you thought you hadn’t got the skills to be involved, this will change your point of view.

My story begins with having  two heart attacks in March 2018; wide awake surgery as a stent was inserted via my wrist artery while I watched; a painful chest infection in the days that followed; and a severe reaction to a drug that left me in bed for a number of weeks. I began to venture out in the month of May. With trepidation, I picked up the social pieces of my life including singing in the community choir.
After the second singing session, (when I lost my purse and popped into the church hall to look for it) I stumbled into the Drama in the Dale costume group.  Liz was quick to ask what I did with myself on Fridays, and wouldn’t I benefit from volunteering myself into the group and I was equally quick to point out that I don’t sew – never have. But to cut a long story short I was more than interested, and left with promises that I would be useful in other ways.In the weeks that followed, I made three firm friends, learnt to use dyes to “mucky up” the country costumes, watched the measuring and making of patterns, endlessly pinned and cut shapes out of reams of material, learnt to make a skirt and how to put a zip in…. Attended dress rehearsals and performances to help manage the quick costume changes with a cast of people who were a joy. Throughout, the chat with the girls was stimulating, hilarious and thought provoking.Since July I have been attending cardio vascular exercise clinics, and endless follow up appointments, and been warned to expect an impact upon my emotional wellbeing, if not at first, then perhaps a slump when it’s least expected. My heart attack peers describe depression, fear, tearfulness, worry. There are strong links between heart attacks and mental health issues.
I get it. I was close to death. Who wouldn’t be depressed? Every aspect of my lifestyle has to be scrutinised and major changes made. My family and close friends hover around me, worrying. I have heard the heart stories of everyone in the close vicinity.I think that there are a number of reasons for my positive state of mind. I have to place somewhere near the top my unexpected experience with Drama in the Dale. This gave me the best distraction. I learned stuff. We laughed. I felt useful. I made friends. The satisfaction was more than I could have hoped for. The positivity of listening to ideas that took physical shape in the form of clothes was magic to me. I loved the discussions about the textures and colours of fabric; the attention to detail… Tweed off-cuts turning into waistcoats and caps…..needles and pins….. I’m a convert…. and…..Last week I bought some cotton material in a charity shop. I am going to make a skirt using an existing skirt as a pattern. I am quietly confident that I can do it.