The chorus in Classical Greek drama was a group of actors who described and commented upon the main action of a play with song, dance, and recitation…

This was the starting point for the latest writers’ workshop. Could this technique be used in our play? How would it work? The writers were given scenarios from the different time periods within the story to develop this idea. The results ranged from the comic to the serious; some evoked the atmosphere of the moors…all in all what each writer produced was very different. The difficult part of the writers’ work is what to leave out of the final production!

The group have now established the time periods in which to set the tale and are developing a structure for the play. The next task is to start compiling their ideas into a script. Performance dates have been set, the venue is booked, the rehearsal schedule is being developed….it is all now a very real event. 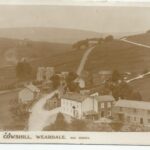 The images show Cowshill pre 1912 (image from collection of P. Nattrass) and the similar view in 1920 with the new church of St Thomas’ Heathery Cleugh in the foreground.